The wind finally blew us off the road but we made it a few more clicks closer to home. Chris knew this cute little place in Beaver to bed down called the DeLano Motel. It’s less than $80 usd all in. The guy that owns the place is a great business man of middle eastern decent. The place is cute on the inside and has a nice patina shall we say? The personal touch he put into the detail of the rooms reminded me of someone who takes pride in his business. In this rural area of Utah this motel would be known as “a dive hotel.” I’ve learned not to judge a book by its cover. The Hotel McCoy in Tucson, Arizona, has the same vibe. You drive into the McCoy Hotel and it is a converted storage shed facility. The rooms are retro in style and very quaint.

While in Mexico, we mostly lived in our van and boon-docked or dry camped. We always tried to find a local eatery or roadside taco shop to get at least one meal a day. It actually costs less to buy a meal out, than to buy all the ingredients and make it for ourselves. Once a week we needed to find a hot shower or a place to use our own and refill drinking water. You could always get a room for $17 usd and use it solely for the hot shower and flush toilet. Costs a bit more than a camp spot on the beach, but the hot shower makes up for it. You then can park the van in a safe parking lot. Score! Two birds with one stone. 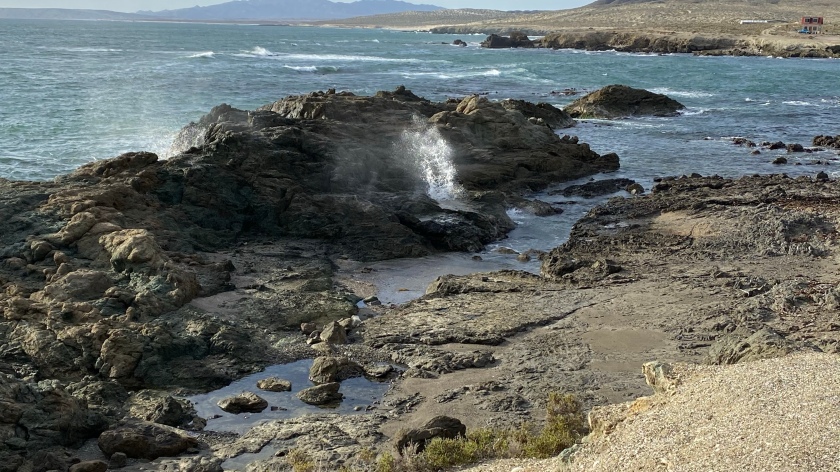 The Bufadora Hotel in Acension, BCS, Mexico, was one of those places that was a cute “dive hotel” by European standards… but we aren’t in Kansas anymore Dorothy.

When we pulled into Acension, it was a normal windy day on the Pacific side of the Baja and guess what… We were stuck in the van by the hurricane force winds. We found the hotel by a referral from my cousin, who lives in Acension permanently, at least for now. They had two small rooms around the back of the complex. The room had a large double bed a window, night stand, ceiling fan, and typical plastic chair. The bathroom had a warm shower, depending on who was showering, and a flush toilet. Best part of the hotel was the patio area which ended up facing the perfect way to block the wind and enjoy the sun. Everyday we’d gather on the back porch and enjoy the sun and the view. The tide coming in would cause the waves to crash on the rock buttress and blow up through the natural blow holes. The sound was thunderous. 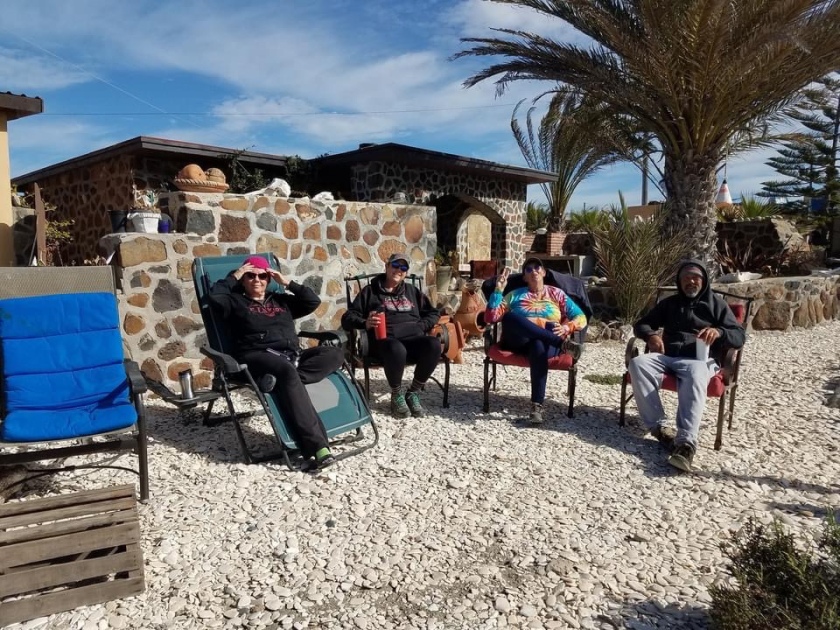 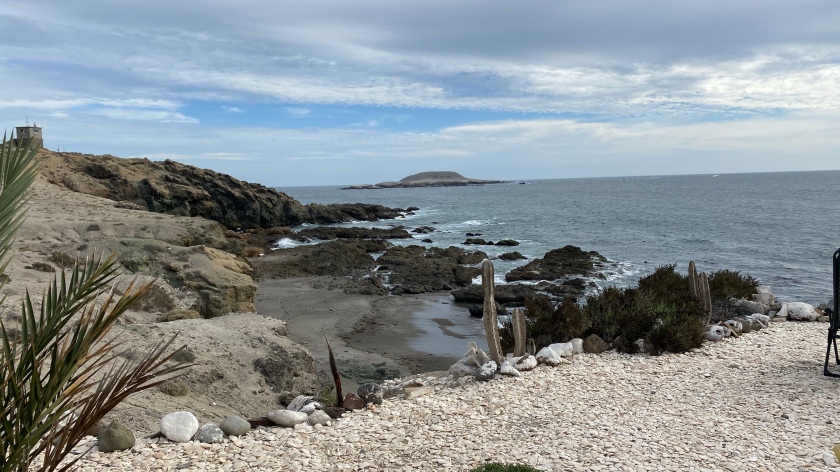 The owner is a well known savvy business woman, whose personal touches made you look past the rusted chairs, rotting fish corpses, and the garbage thrown over the cliff side. Culture… don’t pass judgement.

As you drive through the small towns all up and down the Baja, you see the squalor and the pride side by side. Children play, woman gather on the porches and prepare the big meal for the day. Bright colored clothes hang in rows on drying lines. I am but a passer by on my way to where ever the road takes me. I am in their country, a visitor with permission to explore. Our money is needed in the local communities and those towns that have learned to entice the adventurers, keep a clean area and put pride in every taco, quesadilla, and pollo they prepare for their clients do well. These people are very proud, and kind. 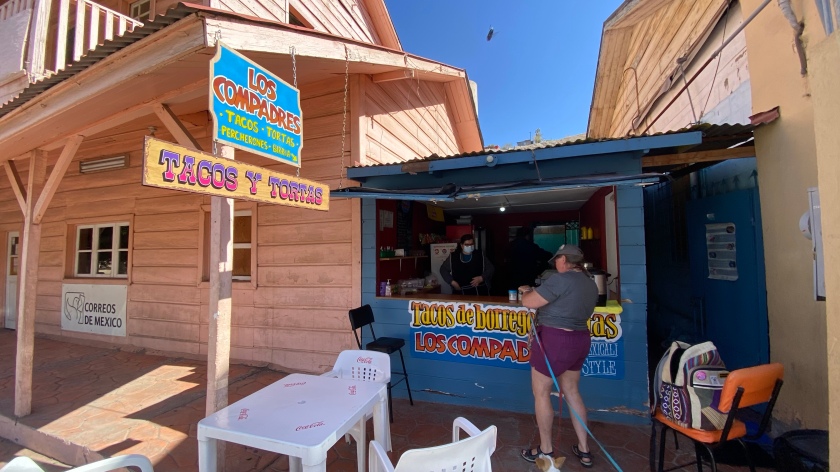 I fought the urge the first few days to be super vigilant and to not be plain old paranoid. Why? Fear of the unknown. Fear because of a prejudice that exists in the recesses of my mind from childhood and cultural conditioning. As I walked across the parking lot of our hotel last night in Page, Arizona, I can honestly say that I felt more vulnerable and fearful walking there than I ever did in the Baja. I never encountered a crazed drug addict with a gun or homeless people lying around. The locals took care to be quiet and respectful and take care of their own. So many horrible pictures painted by the media, state departments and travel advisors that when you see the reality of the kindness of the locals and the communities, you wonder if you’re in the right country. 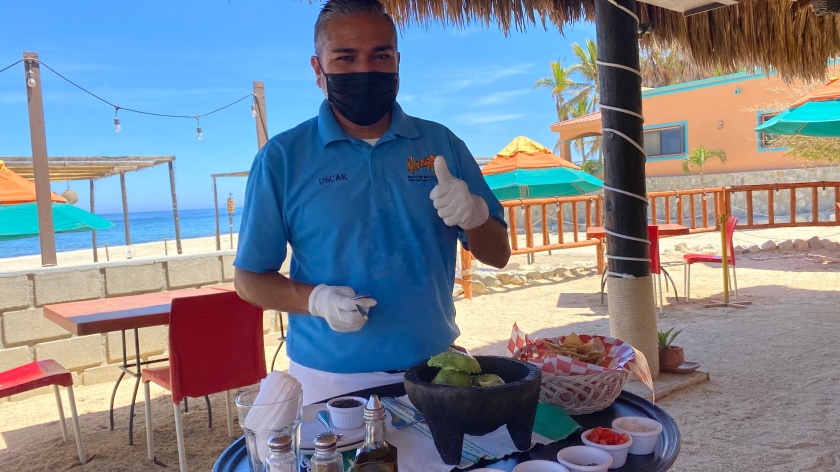 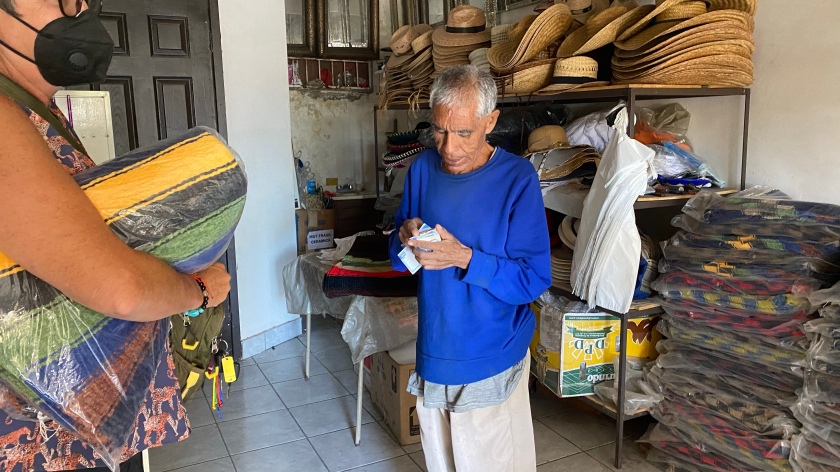 The people we encountered were always friendly and eager to talk to you. If anyone engages you, local, nomads or transplant, better not be in a hurry. This relaxed pace is a way of life that spills over into everything. For example, if you order food or a drink, it will take some time for it to arrive but may be the best meal you’ll ever have, and after you ask for the bill, your pleasant mood will not be dashed… drinks and a full meal for four people… less than $300 pesos or $15usd. It’s hard to believe such good service and great food can be so cheap… by whose standards?

The conversation must be had… COVID in Mexico… we met a gentleman in El Trufino who came out of a clinic door and announced to us that he had just gotten his shot and he was proud to do his part. The man was thinking about others as well as himself. Every establishment took our temperature, required masks and cleaning your hands, before entering because COVID has effected so many families on the Baja, no one argues, travelers and locals alike. Some had lost their entire family on the main land. Everyone respects everyone. How kind. I know a country that could take a lesson from these kind, hard working people. Masks all around, even in outdoor settings. End of subject.

Religion and celebrations seem to always go hand in hand in most Latin countries. The predominant religion is Catholicism and these lovely people have made it fun! The traditional Mexican folk lore and celebrations have been incorporated into the catholic celebrations. Missionaries for hundreds of years have been trying to break this spirit but it seems that a compromise was made, or the Mexicans are just stubborn. This religious stance makes their family key. It was not unusual for an entire family of 9 to pile out of a Ford truck at the beach and spend the day swimming, eating and drinking. We always seemed to be included and they would send over the person who could speak the most English and ask us to join in. We were always served first as the family watched… a bit uncomfortable the first few times but how can you say no? Fresh ceviche anyone? There is a lot of hand jesters and laughing as we all try to communicate.

Traveling has afforded us with experiences beyond our wildest dreams. An open mind and acceptance can take you into a world feared by so many who don’t. “Women shouldn’t travel alone…”

“You will get mugged or worse…”

If I listened to the naysayers my life would be very boring.

Mexican families are matriarchal and no family would ever abandon their elder parents outside of their own home. The men respect women. Families are a community affair… meaning everyone makes sure that if help is needed for a struggling family, everyone steps in. In a way I truly think that they have much better respect for family of all ages.

My friends have moved to Loreto, settled in, and bought an 18 year old house and Louisa, who has been the housekeeper since, came with the house. She and her daughter had been taking care of the cooking, cleaning and whatever was needed since the house was built. Sound strange? Actually it is common to allow the house keepers to keep their job. It’s her livelyhood and source of income for 18 years. They want to keep their jobs and continue to be a productive member of the community, but also support her family. One of the hardest things for a traveler, seeker, an outsider to understand is we can completely ruin the lives of the native peoples if we try to impart our gringo views, meaning… our wealth and extravagant life styles are not theirs. We shouldn’t pity them or try to save them. Guidelines should be observed in tipping and paying for services. We could literally set them up to fail if you should move away. We all spend more when we make more. The concern is… the gringos can always leave. 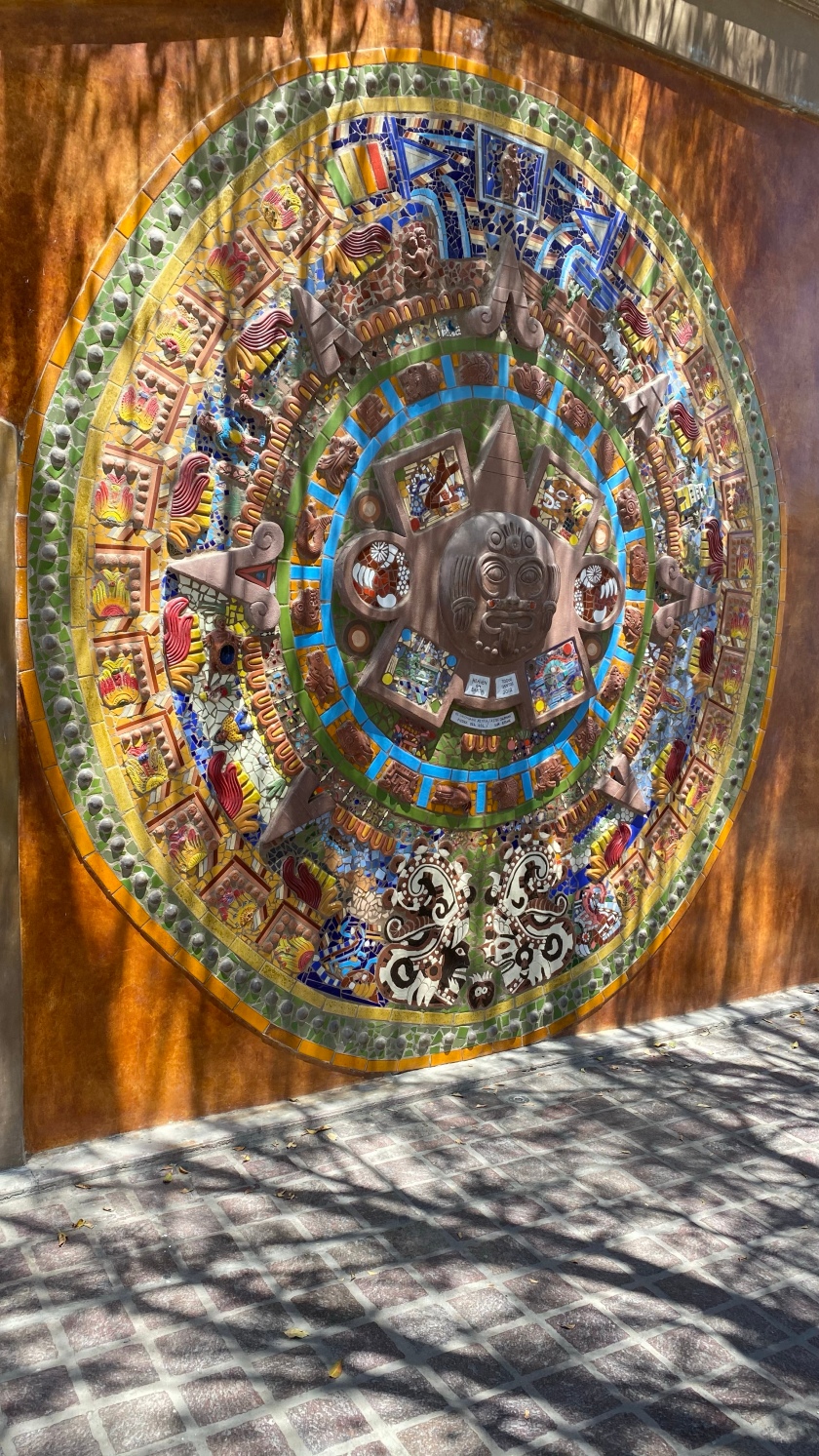 There is so much more to say but we are coming up on our stop for the night. We just drove down a road in Beaver, Utah that had every religion covered. One denominational church sits beside a different and so forth and so on for 12 churches. I bet that only on Sunday, if ever, will this town wake up to the sound of the church bells. Those are things I will miss from our travels into the neighborhoods and supporting the local economy. I hope that things have changed… I am afraid though that my hopes will not be found so I will let things be as they are and just be.