There’s something to say about island life. It’s kicked back pace. Long hours of scraping out a living… or doing absolutely nothing but digging your toes in the sand and sucking up some rays. That soon can growing quite boring, at least for Chris and I. 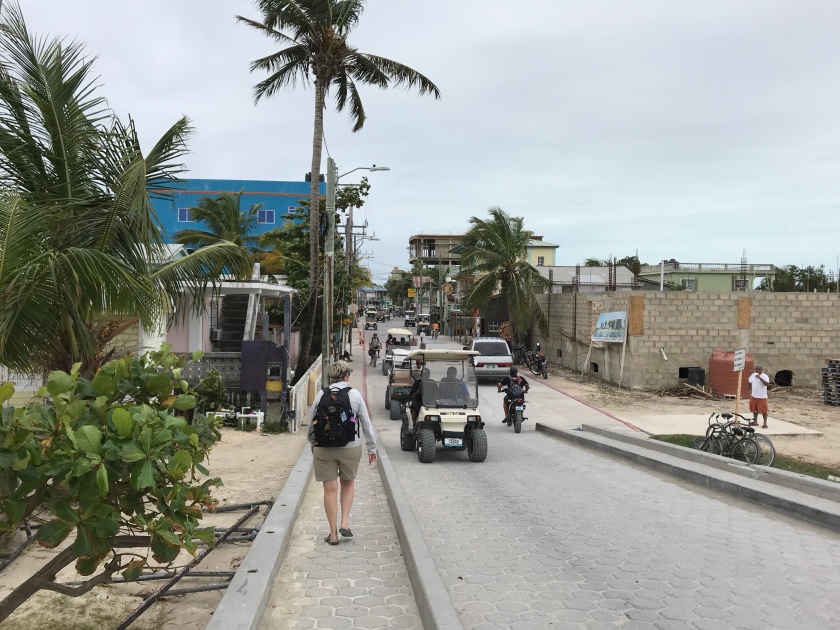 Day three started quite early. We had to catch the 7am ferry back to Belize City in order to catch a taxi and get to our meeting place by 8:30. Of course all of this is in Island time which means, a fifteen minute of error has come to be expected.

We had a golf cart taxi waiting for us at 6:30am. Chris was getting off at the Amore Cafe for some coffee and I was to go the rest of the way with our backpacks, check our luggage and wait for Chris. I began to worry when it was 6:55 and Chris was still no where in sight. There are times when that fifteen minutes comes in handy. She finally showed after walking all the way to The Split and realizing she had missed the docks somehow.

The ferry ride was uneventful, we gathered our backpacks and a taxi and met up with our group, with plenty of time to spare. We soon found out that the group had just come off the Glover’s Reef trip and were now known as the double atollers. For once it appeared we wouldn’t be the oldest in the group… as a matter of fact the group was an average of 55 years old, all professionals, all trying to get to a place in their lives where they can “retire”. We were on the perfect trip! 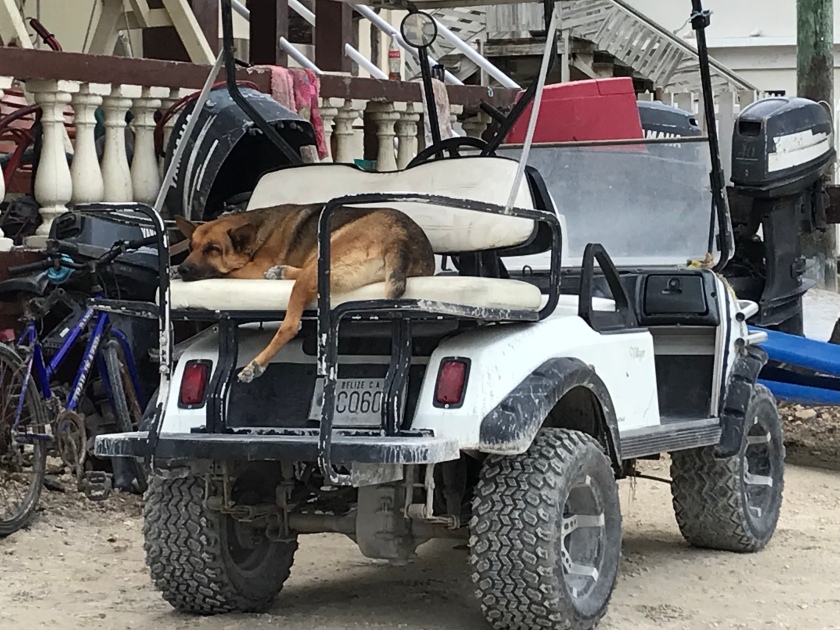 Most of the third day was spent on boats, getting from one island to another at the furthest eastern land mass in Belize. Arriving at our tent camp on the small island of Half Moon Caye, we were broken into our groups, the double atollers and the newbies… Our tents assigned and lunch served, our day could finally begin…nine hours after we awoke.

Impressions of Half Moon Caye:

Unlike many islands were have been on, these Belizeans care about the cleanliness of their little piece of sand. There was very little garbage littering the sandy white beaches and the windward side of the island, that would normally collect what the tides bring in was also devoid of all ocean trash. This is the rest spot for divers of The Blue Hole. This is also the furthest Belizean outpost for The Autobahn Society. They patrol the waters of The Blue Hole for illegal fisherman, help educate the visitors to this island and keep this turtle hatchery pristine.

Half Moon Caye is also a bird sanctuary. There are nesting colonies of Red Footed Boobies, Frigate Birds and Osprey. There are three predominant species of lizards and an exorbitant amount of Hermit Crabs. The camp actually uses the crabs as a form of composting. All the food scraps are put into a bin and the hermit crabs swarm the pile and become a moving, crunching mass of bioengineering, turning these piles into nothing overnight. Remember anything we create (trash wise) on this island must be disposed of, either by burning, hauled off on boats, or organically disposed of.

The air on the island is thick with salt, humidity and birds. It’s like a kite festival with thirty or fourth birds souring on the ocean breezes…silently swooping and diving, gliding effortlessly. On the windward side the breezes keep the humidity to a manageable level, although everything is soaked and wet in the mornings. The further you get away from the ocean breezes, the humidity gets quite unbearable and the turquoise blue lagoon becomes very inviting.

The frigate birds have huge thin wings and forked tail. They glide stealthy on the wind and watch for the boobies or osprey to catch a fish. In a second, the frigates go into action, diving in long swoops, weaving and turning gracefully in the air as they begin their assault on the fish bearing sea bird. They grab hold of the fish, lock talons and spiral towards earth. Eventually they hit the water or until one of the seabirds releases and flies off to hunt again.

At night the hermit crabs come out by the hundreds. The path ways from area to area become a seething river of these creatures. It kinda creeps you out at night when your flashlight accentuates the size of these crabs when walking to the restroom or shower. It reminds me of some alien organism out to snatch you in your sleep and carry you off. With no real predators on the island they thrive!

Most every activity has been centered around water. There is something calming about water. Whether submersed in it or floating on top, it has a magic over me that rocks to my soul. It can be gentle and calm or a raging surf. It has the ability to shape and reshape with little that can stand in its way. I feel fortunate to be able to see below its surface to its undersea world of bright colors. The fragile world that hangs in the balance yet is abundant with life.